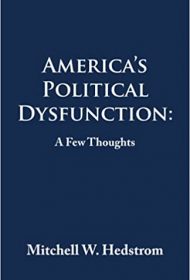 Americans of both parties agree that Washington is dysfunctional. Recently, three-quarters of Americans polled disapproved of Congress’s performance. In this slim volume, author Mitchell W. Hedstrom offers a diagnosis of this political malady and suggestions for a cure.

Hedstrom identifies three main causes of the current impasse. The first is the influence of money, lobbyists and special interests. Since the Supreme Court has ruled that limits on campaign contributions by corporations violates the principle of free speech, Hedstrom favors a Constitutional amendment that would limit the amount that candidates can raise and spend on elections.

Hedstrom then discusses the government’s poor fiscal management that has led to spiraling debt and budget deficits. The author proposes another Constitutional amendment that would allow U.S. citizens to buy and sell gold and silver without incurring a tax burden. The effect of this amendment, the author notes, would be subtle, but would create a safety net for U.S. currency over the long term.

Finally, the author tackles gerrymandering. Hedstrom favors a system where races for the U.S. House would occur on a statewide rather than district-by-district basis. In his scheme, in a state with ten Representatives in the House, if 60% of the vote statewide went to one major party, and 40% to the other, then the first party would receive six representatives and the other party four.

Hedstrom’s writing is clear and concise. The only flaw in his work is a confusing chapter where he proposes a series of debates intended to build a grassroots movement to implement his suggested reforms. It is unclear what these debates would accomplish or what the debaters would discuss. Are they debating the proposed Constitutional amendments? What if the parties agree on them?

Nonetheless, Hedstrom’s proposals are worthy. He is refreshingly non-partisan and avoids the overheated rhetoric that fills hours of cable news chatter. Readers will find in this brief book a rational voice offering pragmatic solutions to political polarization.