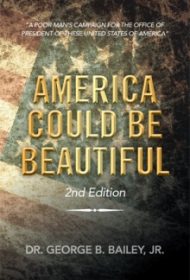 In the second edition of America Could Be Beautiful, Dr. George B. Bailey explains why he should be the president of the United States.

Written in 2013 and revised in 2015, Bailey’s “Poor Man’s Campaign” was published for the 2016 election cycle. It is not clear whether the author intends this book to serve as the foundation for another presidential run in 2020.

Bailey is clearly passionate about his proposals. He advocates on a range of issues, including opposition to gay marriage and stricter immigration controls, as well as more idiosyncratic positions, such as support of corporal punishment for one’s children and capital punishment for certain DWI offenses.

The book lacks any logical organizational structure, which diminishes the impact of his positions. Some chapters devolve completely into a series of bullet points. (For example, Bailey pastes his resume into the book in this format.) In another odd choice, the author copies material from the beginning of a chapter and pastes it word-for-word into another section in the same chapter. As a result of such styling, the book reads as a series of political pamphlets that have been haphazardly combined into one longer work.

Bailey’s lack of attention to the rules of spelling and grammar is problematic. For example, the author appears to quote himself in an epigraph to introduce his work, which begins: “There is a seriousious [sic] illness in…America and it demands healing of itself…” In another passage about climate change, he writes this convoluted sentence: “Now President Obama with the aid of personalities such as Opera [sic], Travolta, former Vice-President Gore, of what are the worst abusers of green house [sic] gasses, to dictate to the world how [sic] protect our planet.” These types of errors appear frequently throughout his work.

As currently written, Bailey’s book is largely inaccessible. Major revision is necessary to develop the author’s ideas into a useful tool to support his candidacy and political vision.