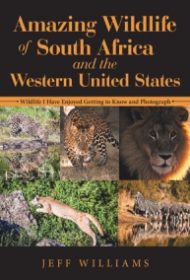 Photographing a tiger, Jeff Williams wondered what thoughts were going through the animal’s mind. A wildlife expert told him the big cat was probably just thinking about eating him. Still, Williams is convinced that animals have souls, and in this eye-catching book, he shares his view of the animal kingdom through photos he took in the wild and in wildlife preserves and zoos. In all, there are photos of about 40 different types of animals.

Giving each beast its own chapter—some just a page, others longer—Williams includes images of most of the animals on the list called Africa’s Big 5: the lion, buffalo, elephant, leopard, and rhino. (While he doesn’t include a chapter on buffalo, there’s one on bison;  he explains, however, that bison are not true members of the buffalo family.) Williams also includes photos of most of the animals on another list called the Ugly 5: the hyena, wildebeest, vulture, warthog and marabou stork. (There’s no chapter on vultures, but many other winged creatures are represented.)

Using straightforward prose, Williams provides anecdotes of his personal experiences photographing the animals and a few interesting facts for each species. For instance, did you know that giraffes fall six feet to the ground when they’re born? But that’s OK because these babies are about six-feet tall and weigh 200 pounds.

Some of Williams’ photos could use more contrast. A few were taken in dappled sunlight, which often causes distracting shadows. Also, there are a plethora of photographs with an overall brownish cast; more variety would have been welcome. But there are many outstanding images as well, including the Harris’s Hawk in flight, the close-up of a zebra showing his teeth, the row of zebras reflected in a lake, and the half-leopard half-jaguar with glowing eyes looking directly into the camera. You may wonder if you’re seeing the animal’s soul or if he’s just thinking about a snack, but either way, it’s an unforgettable photo.