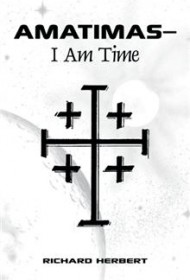 Without dramatic license, literature wouldn’t be very interesting. Most readers aren’t keen to dedicate themselves to a story that emulates the monotony of everyday life. The question is how far to push that license; at what point does the story become so implausible that readers check out entirely?

In the sci-fi/fantasy novel Amatimas–I Am Time, that check-out occurs just a few chapters into the book. At that point, the story has already introduced Albert Lanker, a Seattle architect who has discovered what he calls the Dark Star, a black hole that will soon destroy the earth. In no time flat, Albert and his astronomer wife Jan are granted an audience with the Pope, during which Albert almost immediately convinces his Holiness that this threat exists, that the Pope must use this as an opportunity to convince all people on Earth to become baptized as Christians, and that the Pope can only do this by going into space on a NASA shuttle taking off in a couple of weeks.

Here’s the capper: Within 24 hours of meeting the Pope, Albert has also convinced the Pope that the Catholic Church needs to pay Albert $100 billion–yes, billion –to personally devise a way to save the earth’s population.

Given that setup, it’s no surprise that the U.S. President also immediately goes along with this plan, signing off on sending the Pope into space and allowing Albert the architect to address the threat to all mankind.

It would be one thing if Amatimas were intended to be an outlandish comedy or a wild satire along the lines of some of Kurt Vonnegut works. However, the storyline and its further outrageous developments are communicated without irony. The book has numerous additional problems, including patently unrealistic characters and dialogue.

Credit Amatimas with a certain go-for-broke creative spirit in marrying scientific and religious themes, but there’s little else to recommend it.