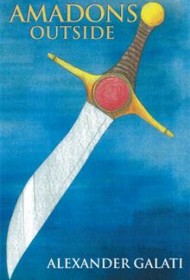 Fifteen-year-old Alexander Galati tells the story of Amadons, a world where citizens live behind walled cities in fear of the monsters that dwell beyond their borders.

Hoping for a fresh start and better life, teens Jessica and Georgia embark on a journey from their impoverished town of South Head to the capital city Besteratra. Their trip is perilous and filled with monsters—and what they discover once they reach Besteratra unravels their faith in everything they’ve ever known. The girls, along with the help of a companion from the capital named Sam, discover that the king has plans to destroy the world as they know it. They must race against time—and monsters—to untangle the web of lies and secrets that threaten their existence.

Galati has written an ambitious YA fantasy that showcases his burgeoning talent. He has a knack for strong pacing, and each chapter is packed with action and tension that pulls readers along.

Unfortunately, the characters’ motivations are not always clear, including the reason the girls venture from the city at the start. Yes, their parents desire better lives for them, but the girls don’t have much desire to leave, and the reasons given aren’t compelling enough to justify such a dangerous endeavor. The lack of deeper motivation weakens the overall plot.

The writing itself also requires polish. Galati chooses to write in third person present tense, which creates an awkward, often-bizarre read. The structure forces odd sentences, such as, “Jessica finds that her left leg finally slipped, and she falls again.” The prose also reads like inelegant reporting at times, especially during the info-dumping early passages, such as: “The village is filled with poor people, children and adults. All of them have been living in their sealed city from when they were born.”

In sum, Galati shows promise, especially considering his age. But his writing needs stronger crafting in order for the story to live up to its potential.