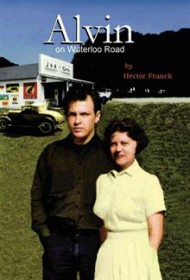 Set in the midst of the Depression in rural Alabama, Alvin on Waterloo Road, centers on three main characters: Alvin; Ruby, the wife of ruthless bootlegger Jesse; and Joyce, a shop owner who is married and pregnant, though not necessarily by her husband, who is now absent as he seeks work up north.

As the story begins, 27-year-old Alvin Hanback has just lost his job. While walking home, he passes the spot where his father supposedly committed suicide and considers ending his own life. It’s certainly not a beginning that portends a happy tale, but the story quickly takes a surprising – and risqué – turn.

When Ruby comes by the Hanback house, asking for a chicken to fry, the chemistry between the pair is immediate and they waste little time acting on it. Before long, they draft Joyce to join in their adult-only play. But while the three frolic, Ruby’s alcoholic husband Jesse is growing suspicious, and it’s clear there’s trouble ahead. It’s not long before Jesse and his friends get drunk and, because Joyce is Ruby’s friend and an easy mark, create havoc at her store: “When Joyce entered the building she immediately felt something strange. It was a feeling she’d never experienced before … When she went behind the meat counter … she noticed the back door partially open. When she examined it closer, she realized it had been forced open.”

Author Hector Franck does a nice job in rendering the setting and mood of the depressed Southern state in that long-gone era. He moves the plot along quickly and renders his characters in full. But as the story plays out, Franck gives into the predictable, making the outcome much too easy to foretell. It can also tend to read at times like an X-rated male fantasy.

While Alvin on Waterloo Road can be an entertaining read, the obvious plot twists and much-too-pat ending overshadow the strengths of the work.