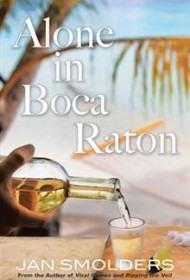 Jan Smolders’ fifth novel, Alone in Boca Raton, is a story about a Mexican family’s desire to reside in the United States and the perils they endure as they pursue this endeavor. Smolders combines elements from suspense and romance genres to weave his narrative.

Mario Osorio is a Mexican textile engineer living in Boca Raton, Florida, on an eleven-month visa. He meets Erin Brown, a widowed owner of a garment factory who offers to sponsor Mario’s green card if he agrees to manage the factory and collaborate on new designs with her daughter, Jenny. After accepting Erin’s proposal, Mario learns that his family has crossed illegally from Mexico into the U.S. Fearful that Erin will withdraw her sponsorship, Mario keeps their whereabouts secret until he discovers his brother has been kidnapped and immigration officials have detained his mother and sister.

Erin enlists help from her lawyer, Tony. But soon Mario and Jenny, who are on the cusp of romance, uncover shady business dealings between Tony and Jenny’s jealous boyfriend, and Mario investigates their involvement in the kidnapping.

The novel’s climax, in which the malefactors confess too readily and the Osorioses’ conflict resolves too neatly, rushes the book’s conclusion and undercuts a satisfying ending. Additionally, Smolders abandons intriguing subplots—such as Erin’s fraudulent business practices and the immigration status of her factory workers—and relies on the epilogue to wrap up his characters’ state of affairs.

The book’s strength lies in Smolders’ portrait of Mario as a man torn between the responsibility he feels for his family and the resentment he harbors against them for complicating his opportunity to make a life in America. There’s honesty in this dichotomy, and readers will likely appreciate Alone in Boca Raton’s moral high ground.