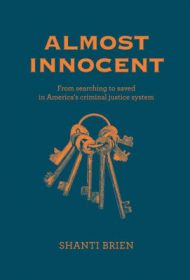 In Almost Innocent, author Shanti Brien, a criminal defense attorney specializing in appeals, serves as both narrator and tour guide as she takes us on the oft-unseen journey of a defendant’s quest for justice within the system long after a guilty verdict has been rendered.

Brien introduces us to nine defendants, all found guilty of various crimes, and explores the circumstances that informed their sentences, including inherent racial bias, socioeconomic disparity, the “War on Drugs,” and a criminal code replete with inconsistent arrest, prosecutorial, and sentencing guidelines that keep jails and prisons packed.

One defendant, Jake, was prosecuted for murdering a man outside a bar. During his trial, his court-appointed attorney arranged a plea deal guaranteeing a chance at parole in seven years. Jake took the deal—only to discover his lawyer had misinformed him about parole. For poor defendants, Brien contends, it’s less about justice than resolving their cases quickly so lawyers can move to the next one.

In another appeal case, a man named Fetu Faraimo had previous drug convictions and had already served ten years on a subsequent drug charge. Brien shows the complexity and fluidity of our laws by highlighting the fact that some of the original charges—which brought harsher sentencing with the newer conviction—were no longer even considered crimes by the U.S. Department of Justice.

The author dissects these cases against the backdrop of her own life, including being blindsided when her husband’s name arises in a fraud investigation into one of his business associates. Still, Brien makes clear her awareness that being a white, financially secure woman helps protect her from becoming a statistic, a protection unavailable to minorities or immigrants.

The author includes facts and figures supporting her claims, although she offers few suggestions on how to improve this deeply flawed system. Nonetheless, Almost Innocent is a gripping, eye-opening, sometimes-shocking read, sure to capture the attention of anyone vested in living in a country of truly equal and just laws.