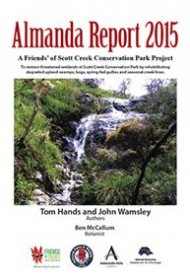 The Almanda Report 2015 would be like any other yearly account for a non-profit project except for the authors’ stated intention to create a model for the preservation and restoration of native habitats for other communities to follow.

The report concerns the rehabilitation of riparian areas by the Friends of Scott Creek Conservation Park in the wetlands of the park located in the Mount Lofty Ranges of southern Australia. Some of the steps taken toward rehabilitation included — and will include in the future — the eradication of invasive non-indigenous plants, such as blackberry, willow, and tree heath by spraying and volunteer weeding; the “bush-cutting of tracks [paths] to assist access to difficult to reach” areas, and the planting of “locally provenant tube-stock.”

In order to measure the success of their project, the group made an initial biodiversity assessment of the areas under their management and outlined plans for assessments in the future. The first base-line assessments are included in the report. Also featured are numerous color photos of the rare plants and fauna found in the park.

While the assessments may serve as good examples for would-be conservation groups to emulate, other aspects of the report lack key information. For instance, the authors state that community involvement is essential, but give no suggestions on how to promote such involvement, except to approach the schools. It also makes much of the endangered Southern Brown Bandicoot living in the park, but does not address why the eradication of blackberry and the cutting of paths will not destroy the groundcover necessary to its survival.

As it stands, the report will certainly be of some use to other conservation groups.  It would be of more value, however, with some expansion and copyediting.