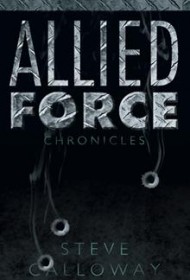 An audacious fusion of The A-Team and The X-Men, this pedal-to-the-metal military-nuanced thriller delivers with its sheer enthusiasm and relentless vigor, despite its drawbacks.

It’s fitting that in one scene the main character Gatlin – one of the leaders of a humanitarian group of elite military specialists known as Allied Force – is shown reading a superhero comic book, because that’s the precise tone of this novel: it’s packed with jaw-dropping action and adventure with little to no focus on character development or existential introspection.

Not so much a novel as it is a collection of interrelated stories, the premise is simple: Allied Force, the brainchild of a brilliant scientist named Tommy J. Lewison, is locked in mortal combat with Lewison’s archenemy Malakai and his Legion of criminal masterminds and nightmarish mutants. The names of the villains are as over-the-top as their abilities: Psycho, Jackyl, Ratchet, Wrath, Grunge, Nazi, etc.

In one sequence, Gatlin and his girlfriend Blade are vacationing at a ritzy resort in Arizona that has been targeted by the Legion. Outnumbered and outgunned, the two heroes channel their inner Bruce Willis from Die Hard and take down the cadre of villainous monstrosities with a little ingenuity and a lot of guts. Other outrageous missions take Gatlin and company deep under the Himalayan Mountains and even traveling back in time to WWII Germany .

While the action is gripping, the grammatical errors are substantial. The narrative shifts from present to past tense frequently – sometimes in the same sentence – and the drawn-out battle scenes dramatically hinder the momentum.

But although the cast of characters is two-dimensional, the plot lines replete with action movie clichés (planes exploding into mountainsides, etc.), and the narrative filled with cartoon sound effects such as “BAMM!” and “BOOM, BOOM, BOOM,” this is undeniably a fun read. Those who can overlook the novel’s flaws will find much to enjoy.