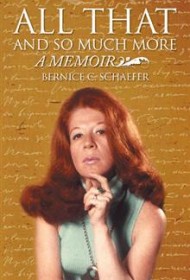 Memoir can be fine art or pop culture; it can also be a legacy left for family. Author Bernice Schaefer jokes in the introduction of All That and So Much More that while her peers have recipes they plan to hand down, she’s upstaged in the kitchen by her kids and grandkids, so instead she offers her life story as both keepsake and cautionary tale.

Schaefer grew up in New York City. Her family fought often, and by the time she was a toddler she’d found escape in the theater, first “playing dead” in the room she shared with her parents, and then through acting classes. As a teen, she and a friend would dress up, hit Broadway, and sneak into the second acts of major plays, sometimes even following the actors home via cab.

Schaefer walks us through marriage, widowhood, moves for school, work, and other life changes in thoughtful prose. She taught theater classes, worked briefly as a psychodramatist (a practice similar to art therapy but with acting as the catalyst), and is now semi-retired from work as a marriage and family therapist. She muses about
communication problems in her first marriage and the various challenges the family faced, but is overall grateful for the good life she’s had.

Schaefer writes with humor and humility, and her self-awareness keeps self-pity at bay, making this a reflective read that nevertheless keeps a steady pace. Glimpses behind the scenes at her various jobs are interesting as well, especially for anyone contemplating a career shift. All That and So Much More will be treasured by the family members who receive it; thankfully, readers outside the clan will also enjoy this story.

BlueInk Heads Up: This memoir may be of special interest to theater fans. Not only did Schaefer spend her youth stalking Eddie Fisher, one of her granddaughters has had a successful career on Broadway.