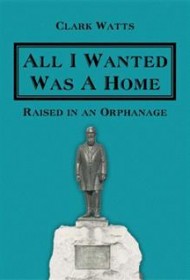 Clark Watts was seven when his father deserted the family, leaving the author’s mother with five children and a sixth on the way. When she deposited the children two years later at the Buckner Orphans’ Home near Dallas, Watts understood why. “The reason we came to the home was poverty, with no other way out,” he writes. He makes the case that, rather than harming him, the experience gave him the foundation for a long and successful career and life as a neurosurgeon, Army Reserve officer, professor and husband.

In his compelling memoir All I Wanted Was a Home, Watts looks back on his childhood pragmatically, including the day his father told him that he was leaving. “I don’t recall feeling anything,” Watts writes, but “Mother … cried briefly, softly, and said everything would be all right.” Watts uses the same matter-of-fact approach when writing about his experiences at Buckner, from the painful moment when he realized the placement was permanent to the joy of finding a baby squirrel he could secretly raise in his dorm room.

In the end, Watts weighs the good and the bad and pronounces his life as far better than it would have been without the orphanage. He spends the final chapters sharing lessons learned: the importance of civility and public service, the loneliness of authority, and the self-reliance gained as one of 750 children vying for the staff’s attention. “I grew up in a world populated by me,” he writes simply, “a template for my future.”

As national debate begins about replacing foster care homes with orphanages, Watts has weighed in. With Buckner, he writes, he and his siblings found the stability they needed to thrive. “Every night I knew where I would be tomorrow and the next day, where I would go to school, and the boundaries of acceptable behavior.” While many memoirs are written as family keepsakes, Watts’ unique vantage point makes for a captivating read sure to please a wide audience.

BlueInk Heads-Up: Librarians may wish to consider stocking a copy or two of this book as a literate and well-written window into an early-day social safety net.