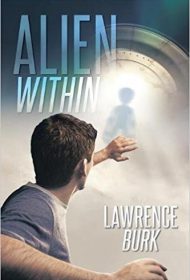 In Lawrence Burk’s science fiction novel Alien Within, protagonist Lincoln Cross is at the end of his life when he is unexpectedly reinvigorated by an extraterrestrial encounter.

Nursing illness, Cross encounters the presence of what he calls God (an omnipresent creator-being) while in a trance-like state. Through God, Lincoln uncovers the role of extraterrestrial intervention in human history, and sets out to help the aliens integrate themselves with humanity.

While Alien Within features one man’s mission in his twilight years, the first 10% of the book is devoted instead to the biographical details of Lincoln’s youth. Then, after his transformation, dozens more pages are spent reciting his newly learned alien history (which is a play off the popular idea that aliens guided ancient cultures on Earth); the effect is to delay the start of meaningful action until halfway through the book, rendering all that precedes it a bloated prologue, of sorts.

Apart from being a slow starter, Alien Within’s action (culminating in global war) is oddly removed from the reader. Burk’s storytelling is mostly recitation: Facts are conveyed, but scenes are rarely dramatized. The most potentially interesting situations involve alien perspectives on human ethical challenges, but the potential is squandered as the moral questions are always distorted and oversimplified. For example: The aliens’ proposed solution to the abortion debate? Implant the unwanted embryos in aliens because who, on either side of the issue, could have any reasonable objection to that!

Sometimes a thoughtful ending is enough to redeem some of the deficiencies in a novel, but Burk squanders the opportunity, choosing instead to cast real doubt for readers about what they have just read.

Alien Within tries to weave engaging fiction from our fascination with extraterrestrials, but it fails to deliver the engaging characters, action, or tension needed to sustain a satisfying story.