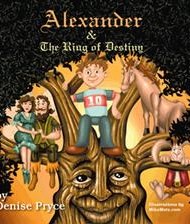 In this children’s story, a young boy named Alexander meets Peter, a talking rabbit who has been sent by the Queen to find him. She believes Alexander is the only one who can help her.

Peter brings Alexander to a fairytale kingdom, where the Queen explains that a villain has taken a ring that will give him the power to steal all the magic from the enchanted forests. Alexander and Peter then set out in the company of Clark, a feisty pony, to stop the villain and retrieve the ring. Along the way they are joined by a fairy whose beloved has been turned into a goldfish. The group squabbles frequently, and has some mishaps, but ultimately it saves the forest and all of magic, and the goldfish is turned back into a man.

The somewhat sophisticated vocabulary used by the author make this most appropriate as a read-aloud story. However, the message of the story would have more impact if there were a stronger conflict established. Alexander is fairly confident that he’s capable of completing this quest. Events are somewhat random — it’s never clear why Alexander is the only one who can save the kingdom, for example, and there’s no motivation for the vulture who appears later in the story to give them vital information.

The narrator occasionally tells the reader about the characters rather than developing them. For instance, Alexander is described as a “boy who did not know who he was,” yet there’s no evidence of that. And although Alexander is the title character, he doesn’t feel like a fully developed protagonist, often taking a back seat to the other characters. Still, the writing is pleasant and the characters and their bickering should appeal to younger readers.