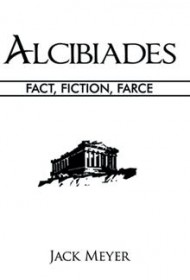 In Jack Meyer’s Alcibiades: Fact, Fiction, Farce, the freelance writer and student of philosophy and the classics reconstructs a “plausible historical” life of ancient Greek Alcibiades (c.404 – 450 BCE) in order to “use the Greek experience as an analogue for a critique of U. S. foreign policy.” He has a great supporting cast: Plato, Socrates, and Pericles, plus a fictional son of the historian Thucydides.

Handsome, charming, and successful, Alcibiades was a ward of Pericles and a friend of Socrates. He fought for Athens, Sparta, Persia, and Athens again, before being murdered. The action in the book occurs during the Peloponnesian War (431 – 404 BCE), that fratricidal conflict between Athens and Sparta.

Meyer’s characters Georgiripides, Dyclyssides, Rumshypocrates are instantly recognizable as George W. Bush, Dick Cheney and Donald Rumsfeld, respectively, with Athens standing for America. The Peloponnesian War, with its twists and turns, seems to represent the U.S. incursion into Irag. Meyer quickly lets us know where he stands; of the three leaders, he writes: “To say that they would become thoroughly worthless would be a high compliment.”

For those with no background in ancient history, some of the narrative may be difficult to follow. There are three competing flows, and the transitions between them are sometimes abrupt. The “farce” sections are very broad, with characters saying “whatever” and other 21st century slang that sometimes seems out of place. There is also occasional need for a copyeditor due to misspelling, punctuation, and overwriting.

But, as the book’s title and approach reminds us, “history repeats itself only as farce.” This is an informed and unique opinion, presented with originality. Despite the flaws mentioned, it would appeal to anyone interested in the ancient world, military and political affairs, and questions of policy and empire. Although the work is partly fiction, there is a brief bibliography for those wishing to learn more about the factual background.