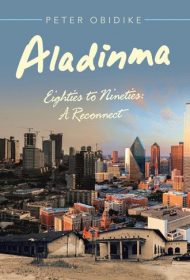 Set in a quiet neighborhood in the Nigerian city of Owerri, Aladinma follows the story of Ginika, a bright, tenacious son of a public servant.

In 1979, Ginika’s father, a Federal Ministry of Works engineer, receives a promotion that forces the family to move from Onitsha to Owerri. Though shy, Ginika shows promise in his new school. He’s a bright student, constantly love-struck with different girls in his class, and his years in primary school are full of fun and mischief. In college and university, Ginika focuses on his studies. Later, after battling discouraging unemployment levels, he settles into his first job, as a banker.

The novel first covers Ginika’s school years, then his career and dating life. The last quarter concerns a copyright case that evolves after a childhood friend plagiarizes Ginika’s captivating series of Facebook stories and creates a movie from them.

Interspersed throughout are details about the country’s economy, culture, and history. Ginika’s lifetime struggle to achieve success, for example, is compared to his rich counterparts who secure top jobs in the country regardless of their qualifications. Environmental degradation, bad leadership, and corruption are other themes explored.

Author Peter Obidike is particularly skilled at creating eccentric and entertaining characters: Ginika’s father is a principled man partial to his wife’s delicious cooking; Ginika’s music teacher is a disciplinarian who wears ill-fitting trousers that must be held by hand since he doesn’t wear a belt. Obidike easily balances serious topics with amusing scenes.

The author tends to juggle too many subplots simultaneously, which can be confusing. And some might be put off by the work’s perception of the role of women, who only shine as wives; their role is not explored beyond the home. For example, Ginika’s girlfriend is perceived to be a great potential wife because she memorizes and perfects Ginika’s favorite dishes.

Despite such issues, Aladinma provides an uplifting read as it explores the challenges of breaking economic barriers to achieve success.