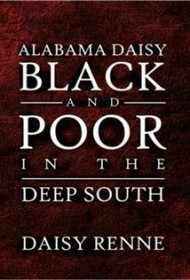 This memoir chronicles the author’s life from her earliest days in Mobile, Alabama in the 1940s, to more recent years when she buries her 104-year-old mother. It’s a tale rooted in poverty and racism that ultimately sees Daisy Renne triumph over both.

The daughter of a street-preaching mother who is a harsh disciplinarian, Renne begins helping feed the family when she is just eight by “shopping” at the dump, where she finds cabbages, chicken wings, onions and potatoes. The hardships continue after her father dies and her mother moves the family to the country, where she aims to build their house. Assisted by a “wino” and a local good-hearted man, they construct a house, complete with a barnyard of animals. But their good fortune ends when the threats begin. One day they return from a trip to the city and find a nightmare.

“Usually when we drove within a mile to the house, the animals would start making weird sounds very loud,” Renne writes. “ …When we didn’t hear any sounds coming from the animals, Momma feared the worst… We found all our animals dead. They had been shot in the head.” Renne’s mother responds to the racism by moving the family back to the city, where hard times continue despite their best efforts.

By age 16, Renne is pregnant. In the coming years, she marries a man who abuses her, gives birth to five more children and at 31, takes all six children and boards a train for a new life in Boston.

This is a courageous story of a woman who refuses to be beaten down. It is written in a soothing conversational style, although it can be redundant at times, and there are occasional editing errors, generally involving verb tenses, such as “do” instead of “did” or “make” for “made.” But these are small matters and do little harm to an otherwise well-told and interesting tale.