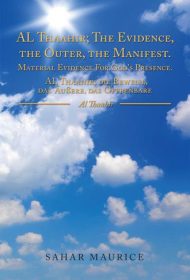 In Al Thaahir: The Evidence, the Outer, the Manifest. The Material Evidence for God’s Presence., author Sahar Maurice shines a spotlight on her personal faith while offering readers a work of Islamic apologetics, arguing for the existence—and goodness—of Allah.

In a series of short philosophical chapters, Maurice looks to “highlight” verses from the Qur’an to show how Allah is involved in all creation, from the visible to the invisible, from the common to the extraordinary. She finds her proof in physical observation, looking to the ocean waves, “the sun, the moon, the stars, the earth, and all heavenly bodies” to confirm a loving Creator.

And if one is blind to nature, Maurice asks readers to look inward to the human body, asking, “Can you control the beating of your heart? Can you pause your heart? And if it has stopped, can you make it start working again?” She implies that human beings only have a tiny bit of control over their own lives or the creation around them. It’s God the invisible, she contends, who makes His presence known in the visible.

Maurice writes tenderly about her faith. Her book, a culmination of 30 years of spiritual seeking and research, is earnest and joyful. Sometimes, however, she stumbles in her writing mechanics, and awkward sentences spring up throughout the book. For example: “Allah the Wise allows animals, who cannot think, to do something that He does not allow humans to do, although He distinguishes humankind from His other creations with thought and knowledge. We, not animals who cannot think, die because of earthquakes.” Though few, lines like these leave readers puzzled.

Such moments aside, Maurice’s love letter to God is a contemplative read, and members of all faiths can glean a universal message of the vastness of God in these pages. Readers should note that this book is a bilingual edition in English and German.