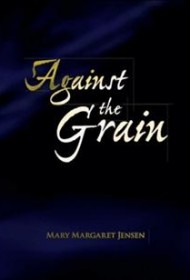 Mary Margaret Jensen’s Against the Grain follows the matchmaking hijinks of Sandy, a feisty, red-headed ten-year-old who knows just enough about adult relationships to cause trouble. When Tobus, her stuttering, earnest cousin, is jilted by the girl of his dreams, Sandy decides to set him up with Ruby, the daughter of the acerbic owner of the local dry goods store. Ruby, too, has been unlucky in love, and she and Tobus seem well-suited.

Unfortunately, Ruby’s parents and Tobus’s Aunt Ada disagree, and when tragedy strikes, Sandy must assess her role in this troubled relationship and help mend fences.

Though this novel stretches to over 500 pages, the plot would have been better suited to a short story. Jensen spends much of the time creating believable and complex characters, but they do little. Scenarios and conversations are rehashed more than necessary, and the thin plot advances at a snail’s pace.

The story is told from Sandy’s perspective, and Jensen does a creditable job of illustrating the challenges a child faces in an adult world, but Jensen never allows her other characters full range of motion. Perhaps this is because the cast of characters is too large, and for much of the exposition, it is unclear which character, other than Sandy, the narrative will follow. This lack of focus creates a cluttered atmosphere that distracts the reader.

Focusing on a few characters would have created a tighter narrative and allowed Jensen to create stronger characters and dialogue. As it is, when the novel reaches the climax, the action feels unfounded and “out of left field.” With such detailed exposition that promises a thoughtful ending, it is hard not to feel tricked as the novel resolves to a disappointing and predictable conclusion.