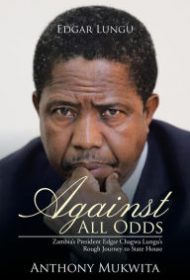 Anthony Mukwita is a Zambian journalist-turned-diplomat who is acutely aware of the dearth of written history about his young country. He addresses that void with this authorized biography of his friend Edgar Lungu, the sixth president of this landlocked southern African country, which gained independence from Britain in 1964.

President Edgar Lungu is a 60-year-old attorney who entered politics late in life and was mentored by then-President Michael Sata. When Sata died in office in 2014, Lungu ran to complete the term. Briskly and with some suspense, the book’s first half relates the political maneuvering and “rough journey” that followed and Lungu’s ultimate win. The second half consists of short chapters examining other aspects of Lungu’s life.

While Mukwita gives an excellent overview of political parties and players, the biography suffers from his bias. A Lungu campaign insider in 2014 and during Lungu’s successful 2016 presidential election, Mukwita fawningly describes the president as humble, patient, good-hearted, etc., instead of detailing the actions that would illuminate his character. For example, in a rare instance, Mukwita shows us Lungu’s political acumen with a first-hand account of a contentious party convention. Lungu entered, cleverly carrying a distinctive walking stick gifted to him by the king of the Lozi people and implying valuable (if not actual) Lozi support to his audience.

Lively writing, such as a crowd’s “uncontrollable spasms of joyful applause,” cannot overcome the book’s overall lack of substance about such issues as Zambia’s economy, corruption, and an HIV crisis, and whether Lungu has addressed them. Most significantly, Mukwita is repeatedly “perplexed” about why Lungu’s opponents and a major newspaper aggressively try to undermine him, a stance that seems disingenuous for an experienced reporter. Photos of Lungu with heads of state and diplomats add to the book’s hagiography.

As a result, the biography’s audience is likely limited to Zambians and scholars of the region, who will quickly recognize the author’s agenda while still appreciating his effort to record history.