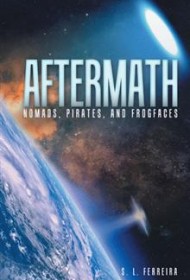 This post-apocalyptic dystopian novel concerns Albert, a former biology teacher, and the group of nomads he leads as they ramble from place to place trying to avoid ruthless raiders and stay one step ahead of the aliens who have invaded and destroyed most of the earth.

As the book begins, Albert is not a very likeable character. “Albert was paternalistic with everyone…He always found fault and nitpicked.” Although he’s doing his best to keep his little group “fed, sheltered and safe,” he’s only grudgingly granted leadership status due to his patriarchal, overprotective behavior.

As the group wanders without direction — other than to survive their horrific situation — they clash with a band of raiders (pirates) who nearly kill them. They’re saved by a larger nomad group, led by a woman called Julia, who claims to be working for the betterment of humankind. They’re shown a way to thrive, given a wagon, and told to drive to the coast, where they’ll be safe. But, Albert wonders: What is Julia and her group really after? And why have the aliens taken over the planet? As the group heads to the coast, fighting off raiders and aliens all the way, circumstances force Albert to reassess his relationships with his son, daughter, wife and friends.

The original story has been translated into English, possibly from Portuguese (the author lives in Brazil), and the book has a distinct South American point of view. Although grammatically correct throughout, some mistranslations remain (“the compost to feed the animals”). Dialogue can be wooden at times; abrupt point of view changes are periodically jarring, and the pace tends to meander. On the flip side, the story features some of the stylistic flair common to Romance language authors, lending a nice touch of magic realism: “Oh how can the moon be so calm watching everything that’s happening on earth?”

Readers willing to overlook the novel’s flaws will find a solid post-apocalyptic story, one that offers an interesting cultural character study of growth and adaptation.