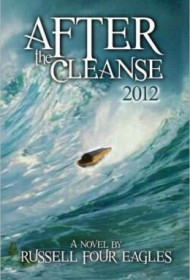 In After the Cleanse 2012, Russell Four Eagles’ narrative alternates between two future timelines–one far off, one very near. The first portrays a young man (Bear Paw, later renamed Gifted) coming of age in a future society based on Native American traditions. The other depicts the lives of people who survived worldwide flooding in 2012. They’re on what amounts to an ark, led by a Native American healer. This provides a thematic tie to the story of Bear Paw/Gifted, who mystically “visits” the ship, the Humanity One, in an early chapter.

It’s an interesting premise, but the link between the stories is never cemented: How exactly does Gifted’s story tie into that of the Humanity One inhabitants? What is the ultimate point of the book? It appears that Four Eagles is waiting to explain these questions in a sequel, leaving readers with an unsatisfying non-ending to this book.

This isn’t exactly a surprise, given the loose structure of the novel as a whole. There’s almost no narrative tension (in fact, a vignette about a tiger family in one late chapter has no apparent bearing on the plot at all). Little in the final pages suggests that After the Cleanse 2012 is building to any denouement.

Even when a book is intended to set up a series, as this clearly is, it needs to have its own complete story. The book also suffers from grammatical issues, most notably in the last 75 pages. In addition, it is at least 50 pages too long. A skilled editor could have helped with some necessary trimming and caught spelling issues, such as the chapter title “Descent (should be ‘Dissent’) in the Ranks.” Four Eagles has talent and can spin some good tales, but in this case, he hasn’t adequately tied the threads of his stories together.