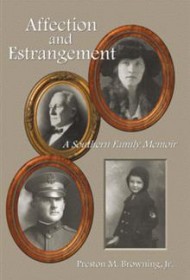 Affection and Estrangement doesn’t traverse the typical birth-to-death journey of many memoirs. Rather, Preston M. Browning’ Jr.’s book meanders from his early years to edgy vignettes of his ancestors from the rural South, swirling the two into musings about how his past made him into what he has become.

The author terms himself an “accidental memoirist” because the book’s contents originally were just sketches he wrote about his extended family’s quirks, compassion, honor and occasional unkindness. He later added his own history, one of a rebellious troublemaker in the 1930s and ’40s in Culpeper, Va. who finally settled down, getting master’s and doctorate degrees and then teaching English at the University of Illinois at Chicago for more than 30 years.

The influence of his professorship comes through when he invokes the writings of luminaries Flannery O’Conner and William Faulkner while discussing family details regarding religion, race and class issues. His aim, he says, is to reveal the complexity of outside influences and forces that contributed to the making of one Southern family.

“Memoir” may be a misnomer for this book, which often plays out more like a doctoral dissertation injected with personal angst. Browning explores the big picture of the human condition — through life histories, analytical views of the old South, the inclusion of personal letters between a relative and Thomas Jefferson, and even the text of a short story his grandmother wrote on “Old Mammy.”

Numerous photos enhance the book, and the research is well documented. Unfortunately, Browning often bogs down his recollections with phrases such as, “I don’t recall,” “I remember nothing about..,” “whether it was true I have no idea.”

In short, this family history is a complex read. Nonetheless, it adds an intimate contribution regarding the impact of Southern culture on its inhabitants that may be of interest to historians.