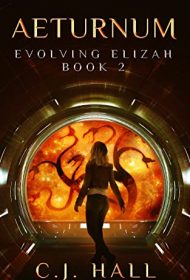 The story centers on Elizah “Liz” Goeff and her brother, Jackson Goeff. A devastated Earth is desperate for food supplies that the cylindrical space stations/spaceships Green Grow 2 and 3 provide. But Earth has broken into ruthless factions that raid each other. Jackson, leader of one faction, has attempted unsuccessfully to take over Green Grow 3, which has now been catapulted into outer space through a propulsion drive malfunction and is attempting to get back into Earth’s orbit.

That ride back is replete with treachery, romance, and plots within plots, as well as blurred lines between the “good guys” and “bad guys,” Jackson being the prime example. Jackson keeps us wondering whether he’s brilliant or evil as he seizes partial control of Green Grow 3 and aims the ship at a coordinate intersection known as Omega, an Earth-like planet far into space. He claims he wants “to lead the New Generation to a brighter future,” but can Liz trust her brother?

The arrival of a powerful discarnate energy being who can only communicate telepathically with Liz, adds to the turmoil.

The story is well-told, particularly the lyrical passages about the energy being, with which Hall begins and ends the book; for example: “Now she is alone—She Who Needs No Name. Her aloneness stretches out almost longer than she can remember. It fills her mind, encroaching upon everything else she knows about herself.” It comes as somewhat of a let-down, then, when the story switches to mere mortals involved in what mortals do: suffering, striving, arguing, etc. Occasionally, the emergence of a narrator takes readers out of the story.

That said, the characters are well-developed, and the plot has more twists than a John Le Carré novel. The story seamlessly fills readers in on the happenings in book one, and the ending leaves ample room for another sequel.