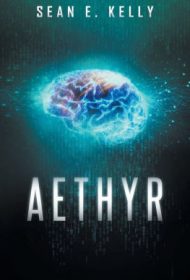 In Sean E. Kelly’s Aethyr, a man whose consciousness has been uploaded to a digital simulation must piece together his fractured memories to solve his own murder.

When nanotech engineer Paddy Riordan awakens after three years of being banished to cyberspace, he’s not quite himself. “I am the ghost in the circuitry, the dead god inside the machine,” he says. We learn that Paddy was part of an ambitious research project to upload the human mind to a digital platform, but in his case, something has gone terribly wrong.

First, Paddy must navigate his way through a dangerous virtual city called New Eridu, escorted by a cryptic knight called Varyag. Chasing a MacGuffin containing his stolen memories, Paddy seeks out a powerful artificial intelligence called the Godhead, aka Lady Raveneyes, and is pursued by a deadly sorceress named Rusalka.

A parallel arc partially explains how Paddy was digitized, seemingly without his consent, using technology produced by the aforementioned research project. The enterprise is funded by wealthy futurist Andrew Damon, who is obsessed with escaping his own mortality. To that end, he has assembled a diverse research team of neuroscientists, bionics experts and biohackers that includes Paddy’s girlfriend.

Influenced by mythology, the story is in the vein of virtual reality fantasies ranging from Tron to Ready Player One, with a dash of Dungeons & Dragons. This is heady science fiction, steeped in complex philosophies about the human condition and the malevolent potential of mankind. The sizeable cast can be a bit bewildering, but Kelly’s prose is crisp and the story nimbly sidesteps many potential clichés. And while Paddy is something of a cipher, reactive rather than proactive in his investigation, Kelly’s unconventional cast of cyberpunks, outcasts, sentient programs and murder suspects keep the roller coaster moving.

Sensitive readers should be forewarned about a plethora of adult language, violence and sex. Otherwise, with its startling denouement, Aethyr turns out to be quite a ride.