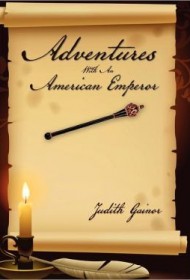 This charming novel blends fact with fiction to tell the story of a girl’s coming of age in San Francisco toward the end of the 19th century. Sent from New York to live with her maternal aunt after her father’s remarriage, 11-year-old Noelle Browning encounters Norton the First, self-proclaimed Emperor of the United States and Protector of Mexico. The Emperor introduces himself to the girl immediately on her arrival, thus beginning a lifelong friendship.

Emperor Norton was an actual San Francisco resident, who, after suffering business setbacks, placed notices in several newspapers in 1859 declaring himself emperor. After proving himself a harmless eccentric, most people humored him, treating him to free meals at saloons and honoring the currency issued in his name. (He was so beloved that when he collapsed on a street corner and died in 1880, almost 30,000 people attended his funeral.)

Noelle’s Aunt Maddie explains the emperor’s history, and the girl takes great interest in this man who has such a regal presence yet treats even the poorest with kindness. She defends him from unruly street urchins, and he later assists Noelle and Maddie in escorting one of their friends out of the city, away from his abusive father.

Noelle learns much from her time in the city, including the fact that her mother and aunt have an ability to “read” people’s emotions. She harnesses her own gifts in this area, providing comfort to those in distress.

Judith Gainor convincingly captures Noelle’s innocence, and readers will enjoy watching Noelle grow from a sheltered child nervously exploring her new surroundings into a confident young woman embracing the world. Carefully researched and peppered with details of the era, this novel will thrill fans of historical fiction, but anyone looking for a good story with well-drawn characters will enjoy Gainor’s captivating story.