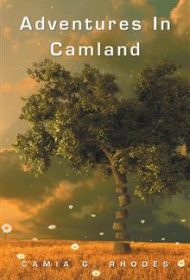 Short fiction collections allow a writer to steer their imagination in multiple directions freely. Adventures in Camland does just that, as Camia Newton presents short fiction and poetry that touch on a wide range of themes.

The title story follows a young boy suffering from an eating disorder. When he’s hospitalized, his two favorite stuffed animals must intervene to save him. “Distraction” follows a girl with anxiety as she moves into a college dorm and meets a handsome boy who seems to like her. Her presumptuous sister immediately hits on him only to be shut down, and her parents wonder why there’s a boy in her dorm at all.  “The Heart of Death” is about Hades bringing an earthly girlfriend home to the underworld, only to discover he’s been duped as to her true identity. “Tattoo” portrays a young woman who initially refuses, then decides to get inked to prove her love.

Despite such meaty ideas, the writing here is choppy and full of inconsistencies. In the title story, for example, Cameron’s sister Lily is described as both the middle and eldest child and her name is spelled “Lily” and “Lilly.”  The story “Today” describes the character Henry first as 6’7”, then “Okay, maybe not that tall, about 6’5”,” then later as 6’1”.

Meanwhile, “Tattoo” features overly long explanations of simple social transactions. And throughout, ungrammatical sentences such as, “He could see the confliction [sic] in her jade orbs” make it hard to get lost in the story. The poems offer a unique perspective, but again, the writing needs polishing in order for them to connect with readers.

Adventures in Camland deserves credit for being replete with interesting ideas. However, the prose here lacks clarity and concision, and thus, requires further editing before the collection can attract a wide audience.