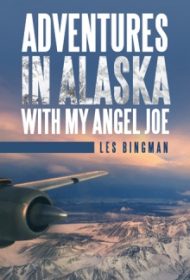 In this clever romp of a memoir, Les Bingman shares his many near-death experiences in the 1970s and beyond while working alternately as an Alaskan bush pilot and commercial salmon fisherman. Throughout, he praises his guardian angel for his protection.

The book opens with Bingman’s early life in a fishing settlement at Nushagak Bay, north of the Alaska Peninsula. There, his mom was involved with commercial fishing and his dad was a plane mechanic and pilot. Once Les is allowed to begin flying and boating, he has many close calls and believes his guardian angel, who he names Joe, has saved him.

The well-written book teems with details of locations, fishing vessels, and flying machines.  His first airplane is a 1939 Piper J-3 Cub with simple flight controls that he dubs “Little Yeller.” He moves on to a C-130 Hercules, a 1960s British Britton-Norman BN-2 Islander, and a Cessna 206.

In a conversational tone, the author builds vivid scenarios of flying mishaps, such as one dangerous landing in a poorly selected location with only one workable brake. “ . . . I crammed on the right brake with my heel and pulled the stick back and to the right. The tail of the Cub switched places with the nose, and the momentum of the tail slinging around pulled us out into the current of the river.”

Through it all, Joe guides him—even manifesting in the physical form of a large man who, amazingly, actually introduces himself as “Joe” and takes charge after Bingman crashes his plane. The man mysteriously disappears once the situation has resolved. “I never saw the large man again,” writes Bingman, “but will never forget him for as long as I live.”

Black and white photos, although small and grainy, are a nice addition to this lively and entertaining memoir, which will be a fun read for small plane enthusiasts, commercial fishermen and anyone who loves the Alaskan wilderness.