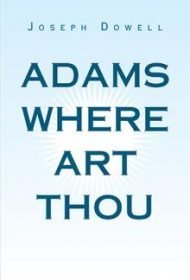 In Adams Where Art Thou, Joseph Dowell examines the duties of husbands from a biblical standpoint through this autobiographical look at one of the darkest times in his life.

In December 2008, an argument between Dowell and his wife Linda escalated to the point of violence. As an assistant pastor, the experience of being arrested, spending a night in prison and shuffling handcuffed and shackled in front of a judge was new and humiliating. The added realization that he hurt the woman he loves was the nearly unbearable catalyst that forced him to confront character flaws of “pride, selfishness and a what-about-me attitude,” which he had ignored far too long. In this candid retelling, Dowell humbly shares his story to help Christian husbands avoid the same mistakes.

In this “man’s book to men,” Dowell addresses his audience as “Adams,” referring to humanity’s first husband from the Book of Genesis. According to Dowell, God gave the first Adam instructions for success in life and marriage. Any potential preachiness is buffered by Dowell’s admission that he’s “changed, not perfect” and by how he engages readers as friends and equals.

The author includes ample scriptures to support his claims and personal revelations. While his biblical examination of Hebrew and Greek definitions lends an academic air, he balances serious discussions with quips and lighthearted nods toward pop culture.

On the downside, plentiful typographical and grammatical errors detract from the book’s professionalism. For example: “When you contemplate on the title of this chapter”; “now that man is trying to be God, a disaster waiting to happen.”; “Now keep in mind, my wife did not want to press charges, but my actions did.” Additionally, the tiny copy of the useful “Power and Control Wheel” graphic, which clearly defines symptoms of abusive behavior, is barely legible.

Christian husbands – whether abusive or not – will benefit from this candid look at how God expects men to handle the precious wives He handpicked for them.