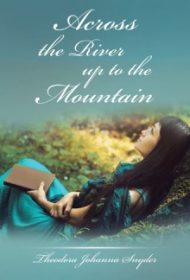 Gloria Foundling embarks on an epic journey, physically and spiritually, in Across the River up to the Mountain, an otherworldly story of romance and self-discovery.

It has been a decade since Gloria’s husband left her, and she’s settled into a routine of work and home, with little else in her life. Then a strange visit from a man named Immanuel changes everything: After he offers her a chance to visit a distant land of riches and luxury and to meet her “Father,” she travels to an impossibly beautiful land. There, she learns about herself and her Father, and finds her life threatened by her Father’s nemesis, the Dark One.

Meanwhile, Jarius’ marriage and music career are failing. But, he gains some solace from meeting the love of his life in his dreams—a love that he later learns is Gloria.

This is thematically rich territory that explores faith, hope, and spiritual growth. But the story suffers from a few obstacles to enjoyment. First, although much of Gloria’s journey is meant to be about her romance with Jarius, they don’t connect until over halfway through the book (and not physically until near the end). The story’s first part detailing Gloria’s travels to Svalbard Paridiseos, the otherworldly home of her Father, feels completely separate from her later romance with Jarius, who she meets online after she returns home

Additionally, the writing style is often awkward. Paragraphs can be exceedingly long, and much of the dialogue is overly formal, as in: “This helps to fill up some of the abundance of free time I’ve been having on my hands, but I still would like to have other things to do as I still have my days where I’m most bored.”

This is a very long story, better suited to two separate books. Still, the author delivers engaging characters, and well-wrought descriptions of the mysterious lands of Gloria’s travels that some readers may appreciate.