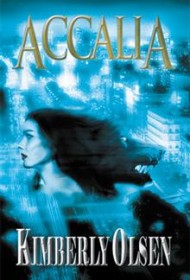 Kimberly Olsen’s Accalia is a dark fantasy novel with an edge of mythic horror.

Diana Laurentia, a cold and beautiful foreigner in Buenos Aires, works as a sous-chef at an Italian restaurant. She keeps her co-workers at arm’s length, so they won’t learn her secret: she is cursed. Since Roman times, every 12th day Diana has transformed into a ravenous wolf. When suspicions mount about the bodies she’s left behind, she simply wanders to a new place.

This time it’s different. Sebastian Michetti, the forensic investigator looking into the very murders that Diana is responsible for, is falling for her, and she just might be falling for him, too. But learning her secret means knowing that she is exactly the vicious creature he has been hunting. And shielding him from that secret might mean letting go of the one chance she has at freeing herself from her destiny, even if it means losing him in the bargain.

Accalia is a quick read owing to suspenseful plotting and generous spacing between paragraphs. Olsen has created a successful character in Diana, who is ruled by a wolfish sense of pragmatism often at odds with the morality of the humans around her. Michetti is also endearing, hitting the right note of skepticism and acceptance, and coming across as more vulnerable than the usual male characters in femme fatale stories. The story has a strong premise and setting. There is an abundance of melodrama, but the characters do their best to sell it.

Unfortunately, the novel’s last chapters never really deliver on the excitement of learning Diana’s origin, and too much is left unexplored. As a result, Accalia is a mixed bag. Readers will appreciate a thoughtful premise and provocative imagery but are likely to find the anticlimactic conclusion unsatisfying.