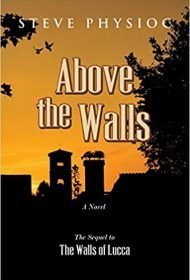 This sequel to The Walls of Lucca continues the story of the Martellino vineyard, its workers, and the citizens of Lucca through WWII and fascist Italy.

The first book followed the vineyard through its struggles in turning a profit amidst the rise of fascism in Italy. Franco Carollo arrives at the vineyard as a shell-shocked veteran, but through the love of the young orphan Isabella, he finds peace again.

This sequel begins after the Martellino vineyard finally turns a profit thanks to Isabella and Franco, but the approaching war and government restrictions again financially threaten the vineyard. Desperate, Giovanni and Susanna Martellino resort to taking in refugees, Jews, and anti-fascists in exchange for money, despite the danger it puts them in. To make matters worse, their sons are stationed overseas, DeAngelo in Libya and Pietro in Albania, while fascist politician Alfredo Obizzi, Susanna’s former lover, seeks revenge on the Martellinos and Carollos for keeping him from the son born from his and Susanna’s affair. Will Isabella’s calming influence and spiritual guidance be enough to save the vineyard this time?

Readers will appreciate seeing WWII from the viewpoint of regular farmers. Likeable characters add to the enjoyment. Susanna was treated nearly like a villain in the first book because of her support for a fascist leader and insistence that her sons attend private schools, which the family can’t afford. Here, she undergoes a particularly strong character arc, transforming into a spiritually rich, anti-fascist rebel.

The exposition dumps that greatly hampered the first novel have been significantly reduced and are presented more naturally through conversation, creating better flow. The prose is straightforward and easy to read, although some scenes lack necessary emotional depth. For example, the much-built-up reunion between DeAngelo and his childhood-friend-turned-lover is over within a paragraph and is thus anti-climactic.

Despite this flaw, readers will find Above the Walls an immersive sequel—one that should please any historical fiction fan.