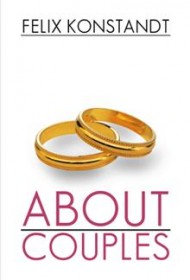 “Into each life some rain must fall.” What poet Henry Wadsworth Longfellow observed in 1860 remains true in 2012. Short story author Felix Konstandt explores a similar theme in his collection, About Couples, looking in on several modern couples to see how they cope with the storms that sweep through their lives.

About Couples spans the globe, from the author’s native Czechoslovakia to Great Britain to the U.S., but most stories focus on upwardly mobile Americans in New York City. Here we meet stockbrokers and medical students attending to the ordinary details of modern life. They move into new apartments, get degrees, go on vacations, and plan for the future.

Just when Konstandt has established his detached, third-person tone, he shocks us, and his characters, with an accident or emergency. Predictable lives fall apart when faced with medical predicaments, terrorist attacks, and an array of other modern tragedies.

The short story format limits Konstandt’s exploration of the impact of these disasters in his characters’ lives. Court cases are heard, surgeries completed and lives resumed in a mere handful of paragraphs. Occasionally the couples share their thoughts in quick snippets of dialogue, but these intimate moments are rare.

Two stories break the mold: the first and last. In the first, “The Chocolate Man,” Konstandt paints a detailed picture of 1930s Prague through the eyes of a budding adolescent romance. In the last, “The Autobiography of a $100 Bill,” he imagines the life cycle of paper currency from the bill’s point of view. This piece particularly stands apart from the others in its immediacy and humor, but also ties into the capitalist culture portrayed in the other stories.

A quick trip through the stories may leave readers wishing that every tale were as compelling as the two framing pieces. Still, a careful reading of Konstandt’s stories sheds a modern light on the timeless theme of humanity’s resilience in the face of adversity.