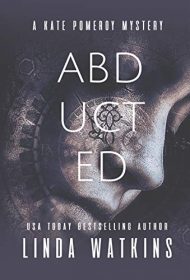 Linda Watkins’s suspense story Abducted is the third in a series about the ongoing enmity between Dr. Kate Pomeroy and Russian Vladimir Sokolov.

In this volume, Sokolov and his daughter Svetlana, who are being deported to Russia for previous crimes, escape during an unplanned stop in Germany. Seeking revenge for events from previous books, Sokolov has Kate, a young medical doctor, kidnapped while she’s in transit to the island where she lives with her fiancé.

Kate is taken to Turkey. Starved and abused on the way, she is subsequently tortured by Sokolov, Svetlana and their henchmen, including being confined for hours in a rat-infested locker. She becomes forcibly addicted to heroin and is beaten by Sokolov, who makes her marry him so he can control her and her money. He also plans to impregnate her via in vitro fertilization so he can sell the babies. A false note in this litany of horror is that he doesn’t rape her. (“He wanted her willing and eager,” the author writes.)

While Sokolov keeps Kate imprisoned, her fiancé Jeremy Bradshaw leans on shady military connections to find and recover her, staying, predictably, ahead of the FBI.

This is a twisted tale of warped “love” that focuses primarily on Kate’s torture. Those who abhor graphic violence will want to steer clear. In the rat scene, for example, one creature tears into Kate’s leg as “The other rats were whipping themselves into a frenzy – the smell of fresh blood driving them insane.” Later, Sokolov finds “a piece of human flesh roughly the size of an American silver dollar” the rats have torn from her body.

While Abducted is fast paced and may appeal to readers who enjoy revenge or rape fantasies, others will find the characters one-dimensional and the violence gratuitous. Even the suspense is marred by the story’s predictability.

The book ends with a cliffhanger, but given its horrors, only a select audience is likely to continue forward.