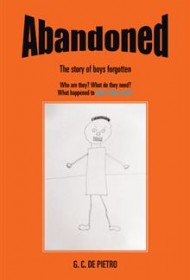 Creative expression in the visual arts can often say what our words fail to communicate. In Abandoned, author G.C. De Pietro tells the story of her work as an art therapist and the impact it has on the boys she treats.

De Pietro, a gallery painter, is working toward a master’s degree in art therapy when the story begins. She gets a paid internship at a group home for boys and begins working with them, toting supplies to and from in her car. She later reveals that she grew up in a home with an abusive father, not unlike the boys she worked with, and used her art room as a refuge. “This was my safe place. I spent hours there in my own world, a fantasy world I had to myself…”

De Pietro’s work in the group home leads to breakthroughs for some, and one frightening confrontation with a boy whose problems ran deeper than anyone first thought. The job ends before she’s ready to let go, but we have the sense that she’s made a positive impact.

While De Pietro is adept at telling the smaller story of her work with the boys and then asking the larger questions about family and mental health that led most of them to require intervention, the writing still hits some snags. On the first page, she writes that the boys “were all arsons [sic],” though she also says she’s not allowed to look at their records. And while she may be qualified to look at a drawing and instantly diagnose the artist as a victim of sexual abuse, she fails to connect the dots for readers so that we understand how she arrived at that conclusion. There are copyediting problems throughout that prove distracting.

Despite these issues, Abandoned is a moving look at kids in crisis, and one surprisingly effective way of reaching them. It’s not perfect, but at its best, this is a powerful story.