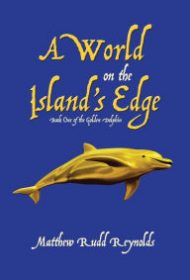 Matthew Rudd Reynolds’ story for middle grade readers, puts  two lonely 12-year-old twin siblings at the center of its plot. Although labeled as science fiction on the back cover, the magical elements and supernatural creatures fit more closely into the urban fantasy genre.

Andi and Artie Johnson have challenging lives on the small island of Grey Cove. Their father abandoned them when they were toddlers, and their mother disappeared, presumably from drowning. They live with their grandmother who’s suffering from dementia. Andi performs the household chores that Grandma Bea forgets to do, while Artie struggles with communication problems and incontinence. When Andi’s school teacher involves the authorities, they threaten to put the children in separate foster homes.

One day, Andi hears singing from two magical golden dolphins. They offer possible solutions to her difficulties, but she must help them. Aided by Artie and a mutual friend, Andi works with the younger dolphin to save this world (and other realms) from an evil entity contained within a disembodied skull.

In addition to the main storyline about good versus evil, several ideas and elements appear throughout the book, including time travel, teleportation, telekinesis, telepathy, dementia, autism, alcoholism, abandonment, and child abuse. The complexity of these ideas makes the story somewhat advanced for this age group, although the appealing black-and-white illustrations are age-appropriate.

The author, who is deaf and uses sign language to communicate, provides rich sensory detail; for example: “The stars swirled in front of her, around her, each one glimmering as if in accordance to music.” Unfortunately, the book’s ending falls flat, as most elements are left open-ended: Is their mother really dead? Why did their father abandon them? Is Artie autistic, a genius, or both? Will the skull creature harm others?

Some will feel unsatisfied by the unanswered questions. Still, the unfinished plot may well compel young readers craving more adventures with the twins and their magical golden dolphin to seek out book two.