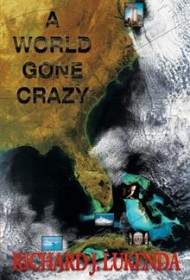 In this suspense story, former black ops operative Zeke is living a quiet, normal life with his girlfriend in Newark, New Jersey. But when he is lured into a viper’s nest of conspiracies, lethal skills come back quickly to the weary warrior.

A World Gone Crazy was inspired by 9-11 and crafted by New Jersey dentist Richard Lukenda, who makes a valiant effort at mimicking Tom Clancy but struggles with cohesive narrative. His hero is everyman Zeke, a former member of the “Creatively Armed Tactical Squadron” (yes, that’s CATS). Now retired, he’s making a life with a girlfriend named Jenna in Newark.

Zeke immediately heads out to visit his Aunt Stella, an obscenely wealthy south Florida power broker with mysterious ties to Cuban exiles and Saudi oil magnates. On the way, he disrupts a hijacking on his plane but uses his government connections to cover his involvement. While in Florida, he also fools around with “ravishing Italian beauty” Helena Campos, whose reasons for getting close to Zeke are multifarious. Returning to Newark, Zeke discovers that Jenna has been kidnapped and taken to Cuba.

The plot meanders at best, throwing in every airport thriller element but the kitchen sink, including bio-engineered weaponry, Al Qaeda terrorists, the sugar trade, a former lover from C.A.T.S., a powerful cabal called “The Seven,” and some cringe-worthy sex scenes. The framework for a thriller is here, from its cranky hero to exotic villains and locales, but poor grammar, ungainly dialogue, and a scarcity of action sequences take their toll.