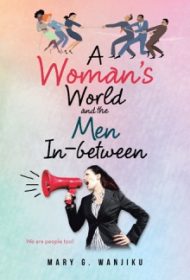 Mary G. Wanjiku’s novel, A Woman’s World and Men In-between follows the life of Jenny who seeks to escape the oppression and abuse that is the norm in her small Maasai village.

Jenny is born to the 12-year-old child bride, Linnet, surviving complications at birth that take the life of her twin brother. Early on, Jenny understands that a woman’s life in the village is little better than that of a slave. After witnessing the forced circumcision of her friend, resulting in her death, Jenny makes a plan to escape.

Arriving in Nairobi, she survives by her wits and through the kindness of strangers. She attends the university and finds work, and then she meets Johnny, “…the stunning farm boy who turned into a millionaire mogul” and falls in love. But Johnny has a secret dark side, and Jenny soon finds herself the victim of violence.

Wanjiku does an effective job of highlighting the plight of some women. The early “cutting” scene is brutal and graphic, raising concern for Jenny and what lies ahead. But too often the story reverts to generalities about gender and delivers didactic passages, such as: “Jenny wanted the women to resist the gender imbalance in every sector. She was eager to end the cycle of injustice, discrimination, and oppressive practices in order to make the next generation of women feel empowered in every part of their lives.”

The story also raises many unanswered questions. In Nairobi, Jenny continues her education, and then attends the university, but there’s no explanation of how she manages to make this happen. When she takes a job, readers aren’t told what kind of job, or how long she has it before she is fired for urging her colleagues to fight for their rights. Meanwhile, Johnny inexplicably seems to have dual personalities.

Additionally, the text is marred by grammatical missteps. Babies “slither” into the world, Jenny “learnt,” and Johnny lives in an “excluded” mansion.

In sum, while the novel’s message will no doubt resonate with many women, the plot and characters require more development for it to deliver a compelling read.