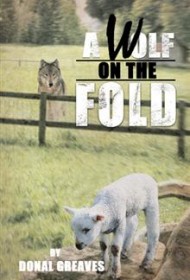 In the first pages of his new thriller, A Wolf on the Fold, author Donal Greaves offers a comprehensive synopsis of the book’s plot. Readers will be grateful, because the action in Greaves’ third book takes some effort to follow.

Greaves takes us into the world of Captain Miles Scholland, alias Candor, a grieving widower and a paid assassin. In a convenient joining of his professional and personal lives, Candor has been hired to track down the very Israeli terrorists he blames for his wife’s death. Add in some mistaken identities, a long lost daughter, and international chase scenes, and you have all the elements of a gripping thriller — minus the grip, unfortunately.

It’s difficult to remain engaged, as Greaves spends an inordinate amount of time on mundane details – exactly how a glass of Scotch is poured and consumed, for instance – and little on character development. Since much of the action is repetitive, involving a long line of hijacked cars and airplanes, the reader needs more reason to stick with the story. Greaves offers some glimpses of Candor’s inner thoughts, but little that truly engages the reader.

Interest is highest when Greaves puts his characters in tension-filled environments, such as the cockpit of an airplane that carries undiscovered stowaways. Here the dialogue is tight and the suspense palpable. Twists at the very end, however, are predictable, even without the benefit of the author’s opening summary.

This novel would appeal to readers who love the “procedure” part of police procedurals, but for most readers, the book will be too complex – without enough payoff. Only diehard fans of Greaves’ earlier work in the same genre would probably want to take on the challenge.