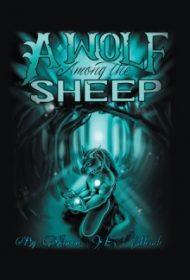 Bloody and graphic scenes predominate in this short story titled A Wolf Among the Sheep.

The novella tells of three young friends on a camping trip near their small-town home of Grand, Oklahoma. Brandon, the most innocent, is mauled by a monster previously assumed to be a Native American legend. Thankfully, his wounds heal almost immediately, and the original “large ape-dog” doesn’t appear in the book again. But anyone familiar with werewolf movies knows what the monster is and that the curse will pass to its victim. In this case, it takes a while.

Years later, after the three have gone their separate ways and returned to Grand, a ferocious animal begins attaching the townspeople, starting with Eric, one of the original three, on his wedding day. At first dubious, the townspeople soon realize that a werewolf is in their midst. To battle the Beast and exact her revenge, Eric’s fiancée must ultimately give up her own innocence.

Unfortunately, this fairly standard horror plot suffers from technical problems. As victims describe being eaten by the werewolf, the author frequently shifts from third to first person. Once their hearts have been devoured, he abruptly returns to third person. Such shifts prove confusing, and it’s often hard to tell who’s talking. Also, descriptions of the “chomping” werewolf quickly become redundant.

Occasionally, the dead victims meet in a kind of spirit world. Tying these interludes to Native American mythology might have provided a unifying force to the tale, but the scenes are so brief that they detract from, rather than enhance, the themes of revenge and retribution. Meanwhile, frequent tense changes from past to present, sometimes in the same sentence, are disorienting, as are spelling and punctuation errors (“thier” for “there”; “alot”  for “a lot”;  missing commas, etc.).

If A Wolf Among the Sheep were trimmed and thoroughly edited, it might succeed as a short story. As it stands, the novella requires revision to find an eager audience.