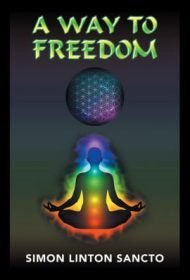 In A Way to Freedom, Simon Linton Sancto shares his personal philosophy for how he became free from worry, stress, addiction, and the physical bonds of life and death. His beliefs are compiled from New Age philosophy, the ancient teachings of Buddha, Mohammed, and Krishna, and his Christian faith.

Sancto spent more than six years in prison (for an unspecified crime), which gave him the “blessing of unlimited time,” he notes, to read and meditate on everything from chakras, the mind, and the human ego to world religions and “the whole truth about Jesus.” He believes he himself “was resurrected from the cycle of death and rebirth” and instead of dying received the Spirit of Christ “[and] I became eternal in the lightbody” to “save souls in Jesus’ name.”

The book consists of more than 100 short essays. They present some interesting theories on the mysteries of Jesus’ conception, crucifixion, and resurrection, and information on the benefit of humility and meditation, how to change, the power of now, and the Law of Attraction.

Sancto also takes on subjects as vast as Ancient Egypt and evolution to those as personal as “the Spirit of Love.” The fact that he gives Einstein’s Theory of Relativity nearly the same space as “Indigo Children, Star-Seeds and Light-Workers” will cause readers to question his credibility on the more serious subjects. He also presents as fact contested beliefs such as John the Baptist’s and Mary and Joseph’s connection to the mysterious Essene community.

New Age adherents will find much of the material familiar, while devout Christians will connect with Sancto’s passionate belief in Jesus’ power to give eternal life. Unfortunately, he’s likely to alienate one or the other of these audiences by giving their beliefs the same credence. His solution to this sounds simple, but may prove a tough sell: “The teachings or revelations in this book can be of significance if one reads them with an open and unprejudiced mind.”