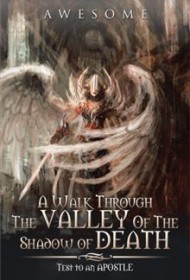 Written from a jail cell under the name Awesome, this memoir tells how the author’s faith got him through a childhood of horrific abuse, homelessness, and crime.

Predicted by his grandmother to be the second Apostle Paul, he was instead beaten by his drunken, controlling father for the smallest of reasons, such as getting a drop of ketchup on the kitchen counter. After escaping from his dysfunctional family and running away from home at a young age, he went from living on the streets to prison and back again, continuously caught up in theft, drugs, and child prostitution.

When he reached adulthood, Awesome aimed to change and seek stable employment. But his old ways continued to haunt him. The people he trusted lied to and betrayed him, keeping him from reaching the life he desired.

The opening chapter of this book seems to promise an inspirational Christian message, but other than the occasional Biblical reference dropped in, there isn’t much linking this story to religion. The stream of consciousness writing style reads more as a series of vignettes from Awesome’s life. These can be confusing, as long, off-topic tangents take the reader out of the story as they deliver whole paragraphs about cheating at cards or how McDonald’s burgers are cooked. There is an occasional hard-hitting and brutally honest account of issues such as racism and the corrupt prison system. However, these moments are buried throughout pages of unnecessary details.

While Awesome’s situation is sympathetic, little is revealed about his character or how his experiences changed him, spiritually or otherwise. Christian readers are likely to be turned off by the overly graphic descriptions of sex, violence and drug use. Finally, consistent spelling and grammar mistakes further erode the narrative’s effectiveness.

In sum, while Awesome clearly has a compelling story to tell, this memoir lacks the coherence and depth to make it an engaging read for a wide audience.