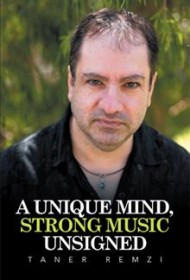 Taner Remzi, an alternative rock/pop musician from Australia, has two purposes in his memoir. He wants to write about music and its impact on his life, and he wants to present a record of family events. But not necessarily in that order. “I have . . . discovered this writing to be just as satisfying [as my music] in many ways. I am able to articulate just what I want to say in an entertaining and descriptive way, not just all about my music.”

Remzi’s early life stories are mostly about pedestrian things he did growing up in the ‘70s and ‘80s: watching TV, hanging out with friends, enjoying a close-knit family. Although the author has many happy memories, he also writes of frequent disappointments and frustrations: bands he’s been in that haven’t achieved major success; substandard living situations, his inability to find a soul mate.

All that would seem to provide plenty of interesting fodder. Unfortunately, Remzi doesn’t dig deeply enough. He writes of his sisters, friends, family members and fellow musicians without naming them, and his stories often include phrases such as “I can’t fully remember,” and “I am not really sure.”  What should be easily verifiable family facts are glossed over (a cousin he writes about may or may not have returned to England; his sister got married in 1986—or ’87).

The same superficiality is true of his discussion of his music. He mentions bands he was in, his musical influences (Neil and Tim Finn) and so on, without exploring broader issues: What is his writing process? How is he inspired to write? And so on. More thoughtful reflection and detail would have helped the narrative.

Ultimately, the surface approach limits the audience for the book. A Unique Mind, Strong Music Unsigned is more likely to be appreciated by family, friends and fans of the author’s music than readers at large.