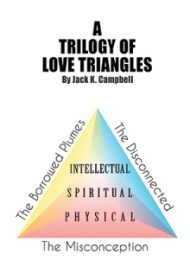 In this trio of novellas, male protagonists find themselves in troubling situations with women as they also deal with the changing times of their lives.

The first, “The Misconception,” finds Eugene Baran awakening in a hospital bed to news that he has wrecked his car. As he moves in and out of consciousness, his mind takes him back to his youth and the time when he feared a girl he did not love was pregnant and he would be forced into a shotgun marriage. At the same time, he has parted ways with the union during a meat-packing strike at the slaughterhouse where he works and must ultimately join the Air Force to escape the “union goons” and “neighborhood scorn.”

In “The Borrowed Plumes,” drafted concert pianist Leighton “Lee” d’Arcy returns from a North Korean prison camp and becomes convinced that the woman who claims to be the love of his life is an imposter. And in “The Disconnected,” Professor Ayres Morrissee finds his marriage ending as the chaotic 1960s wreak havoc on private lives and public institutions.

Campbell has a clever way with words, delivering lines such as,  “I’m finding a body of evidence, but not the body of your wife,” or  “… Hart Benedict, had twelve letters, one letter for each hour of the clock, making him “a man for all time!” His writing is generally clear with a natural flow, particularly skillful in “The Misconception,” where his transitions keep the shifts in time easy to follow. His characters are well developed and authentic.

But there are also some puzzling grammatical choices, such as the overuse of exclamation marks — six in the first four paragraphs alone — and, in certain passages, a lack of articles “a” and “the,” which distracts readers from the story.

Still, the characters are colorful and the settings true to the times depicted. Trilogy is most likely to appeal to readers who enjoy stories set in and driven by recent history.