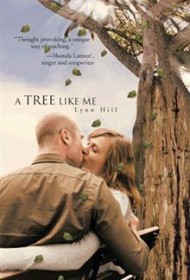 A Tree Like Me by Lynn Hill is a small, personal book of poems that often address the quiet strength required to get through everyday living. All of the poems are centered on the page and many employ simplistic rhymes.

Much of the author’s work explores personal strength, as in “Rock Me,” which begins, “I don’t mind being stretched as long as the pull / Is in a positive direction. / To beneficially sense or test my strength / there needs to be a connection.”

Hill’s narrator has a resilient attitude toward life, and her poems take a teaching approach. For example, “Bitterness Out,” talks about people with bitter attitudes: “There’s a treatment for them, it’s one my mom used to use. / I’ll give you directions to see if it works for you./ Hold them in your hands ever so lightly. / Be careful, they may ooze if held to [sic] tightly.”

Other poems are religious praise pieces, as in “When I Bow Down”: “May I bow unto You despite all my needs, / Just as Mother earth does instinctively? / Thank you Lord for Her giving birth to He, then me.”

Unfortunately, too many of the pieces feel constricted by the need to rhyme. It’s as if the words have been chosen to complete a rhyme, rather than to convey more meaningful observations. (“There was a young lady that lived on a hill. / She had many children, baby boy’s name was Bill”). In addition, the imagery is often clichéd. The idea of earth as a mother in the abovementioned poem, for example, has been used countless times elsewhere, and the poem lacks any further evocative imagery to draw readers into the narrator’s experience of gratitude.

While Hill’s placid tenor may be soothing to some readers, such as those looking for religious poetry, most will find these poems too simplistic and lacking in originality to engage their interest throughout.