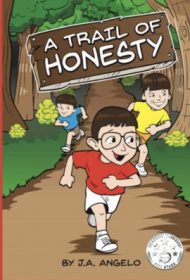 The story follows the Angelino family as they vacation at a campground and hike along a nature trail. The brothers spot wildlife, including an angry buck, swing on a vine, and pick fresh apples.

Later, sitting on the car’s hood, they eat the apples. When dad asks if they’ve thrown their apple cores in the trash, they answer “yes”—but the illustration reveals otherwise. At night, a raccoon attracted by the apple cores damages the car’s hood, and the next morning, the boys admit they lied. The story concludes: “All three boys were sorry, but they still had to face the consequences.”

While the story is well-intentioned, several flaws hamper enjoyment. Although pleasant, the hiking portions do little to further the main plot. And while the illustrations generally serve the story well, one in particular is problematic. On one page, the boys are shown eating while sitting on the car; then we see apple cores littering the ground once they’ve left. A few pages later, Angelo contradicts that depiction, writing: “They had left their trash on the hood after all.”

It’s also not initially clear that the boys consciously lied. (Readers might reasonably wonder if they had simply forgotten they hadn’t thrown the cores in the trash.) Readers only learn their intent a few pages later, when the boys admit their misdeed.

The book’s professed moral is that children should never lie, but one could argue that the problems presented here arise as much from not following directions as lying. And, finally, the story ends abruptly (followed by two pages of discussion questions). Readers never see the brothers growing from the experience; thus, the book feels incomplete.

Although disappointing in such respects, A Trail of Honesty might serve as a starting point for a parent-child conversation about honesty.