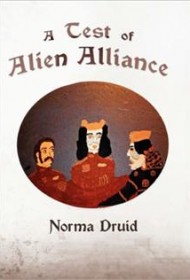 In Norma Druid’s novel, A Test of Alien Alliance, overpopulation has forced humans to migrate to a habitable interplanetary system in a faraway galaxy. Also inhabiting that system are Varangians, a rather aggressive race of horned humanoid aliens. For 500 years, the two races have coexisted in relative peace, but when three Varangians disappear in the human planetary system, tensions build until an investigation leads Commodore Nimrod Ekeroth, half-human and half-Varangian, on a covert mission to rescue the victims from a dark prison on the planet Hades. The Felidae, a race of giant talking cats, do their best to help keep the peace.

Much of the action takes place onboard spacecrafts, which are exploring the myriad planets to enforce the system’s commercial routes. Under scrutiny is Sosthenes, a rogue planet ruled by the Tyrant, Diotrophes. Under the auspices of the Hanseatic League, Ekeroth navigates his space cruiser Belisaurius through a particle storm in pursuit of the Tyrant, who is suspected of piracy and holding the victims as prisoners. During the mission, Ekeroth’s fleet must fend off the Tyrant’s cutter ships, the Mosquitoes.

Crafting her work in the style of a Star Trek adventure, Druid employs her in-depth knowledge of mythology and ancient history to develop and embellish a varied cast of races and characters. Unfortunately, keeping track of these myriad characters, races and locations proves an exasperating reading experience and consequently causes the pace to bog down. In addition, readers expecting some good, old fashioned battle scenes with the Tyrant’s pirates will be disappointed, as the story provides scant doses of either spaceship attacks or hand-to-hand combat. The narrative often reverts to a newsroom telecast and commentary. In sum, while A Test of Alien Alliance offers some intriguing elements, description and wit, the book sinks under the weight of its many parts and never coheres as a whole.