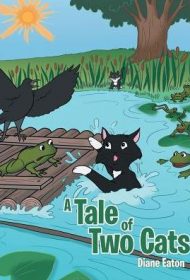 Bingo, a black and white cat, is adopted from a shelter by Mr. and Mrs. Brown and soon joined by Buddy, a similarly colored kitten. The two become fast friends, and together set out on a series of neighborhood explorations, meeting a crow, squirrels, mice, rabbits, and other animals, along with the local kids. Together, they take up soapbox racing, “sail” in a big tree that sways in the wind, and help their less fortunate animal friends prepare for winter.

Seemingly targeted for a second or third grade reading level, A Tale of Two Cats looks for magic in the enjoyment of everyday life. In its cheery tone, it recalls Arnold Lobel’s Frog and Toad books, except where those books utilized a small, ultra-simple vocabulary for beginning readers, this employs a more sophisticated vocabulary, and the pages are dense with text. In fact, the book is mostly words, with a rather basic full-page illustration included for every nine or ten pages of text. At 118 pages, this makes for heavy reading, although the book is broken into short chapters to make the task less intimidating.

Eaton’s story has plenty of charming touches (such as an aside that “meow” means “yes” in cat language), but also some flaws—most noticeably, an occasional lack of commas where needed. Also, while the book’s chapters build on each other, the main propulsive force is the passage of time as the seasons change throughout the year. The lack of a more compelling, book-scale plot, and the absence of notable rising action or an easy-to-identify climax makes the story bland at times, especially given the hefty word count.

Even so, A Tale of Two Cats exudes a joyous energy and might make a useful bridge from shorter picture books to chapter books for ambitious young readers.