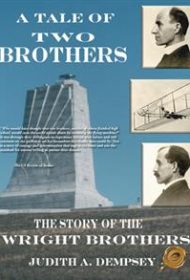 Judith A. Dempsey has two connections to Orville and Wilbur Wright: Like the brothers, she was raised in Ohio, and later moved to the Outer Banks of North Carolina, where they made the first powered airplane flight in 1903. Those links prompted her to write this biography, initially published just before the 100th anniversary of their first manned flight.

Dempsey’s sources include the brothers’ papers, writings and speeches, as well as court cases, newspaper accounts and other books. Her goal, she writes, is to focus on the human side of the brothers’ lives and work. She does so with some stories that will be new to many readers. For example, Orville’s inventive bent went beyond flying; later in life he patented a toaster and “Flips and Flops,” an acrobatic clown toy.

Still, most of what she relates has been published elsewhere. That’s not necessarily bad; many people know little about the brothers beyond their 1903 Kitty Hawk success, so a recounting of other facts and events – their struggles to convince the U.S. government of the value of a flying machine, their engineering genius, their fights with those who sought to cash in on their success– is welcome.

Dempsey’s writing could use tightening, however. She sometimes strays from facts and makes assumptions about her subjects’ actions (i.e, the Wrights’ mother “surely” or “undoubtedly” did or said something). There are also redundancies and grammatical errors, such as the brothers “pouring” over a publication, and “new” records being set.

While the author notes that the book is for both adults and older children, it seems skewed to the latter. The brothers’ return to Ohio at the end of 1904, for example, comes across as very “golly-gee!”: “They were going home for Christmas! What a wonderful Christmas gift this was!”

While not a scholarly tome, the book is informative. Anyone wanting to learn more about the Wrights, especially high school-age readers, can benefit from A Tale of Two Brothers.