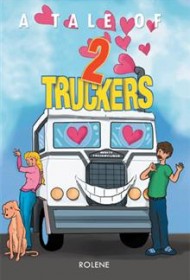 Born in 1949 and raised on Long Island, Rolene (a pseudonym) was typical of many women of that era, marrying young and having the first of two daughters by age 21. Her husband, an over-the-road trucker, left for weeks on end, bragging about his drives in the sunny West. One frigid winter, Rolene decided to ditch that husband and move to the warmth of southern California.

Somehow, she ended up with another trucker, Randy. Their trucking business mishaps began after Randy purchased a used 1971 Freightliner two-axle truck, “old Betsy.” He began work as an independent owner-operator, with Rolene navigating, and their gassy, vomiting dog Hooter by their side. Trouble found them time and again as they struggled with freight hauling issues and crooked trucking business owners who hijacked their pay and sent them on impossible jobs. They grappled with endless road trips, truck breakdowns, and many tickets and trips to court.

By 1990, they decided to build their own trucking-for-hire business. However, hiring reliable drivers was fraught with problems as well. Rolene swears she would never do it again, but did keep her sense of humor and learned to talk the talk of things like “cab-over,” “crankshaft,” and issues with a blown “235 Cummins motor.”

Rolene’s trials and tribulations in trucking prove an entertaining and insightful ride, offering down-home wisdom on subjects from calming one’s highly agitated husband to hard lessons learned when hiring drivers (Examples: Never hire a friend. And never count on drivers to check their own brakes.) No doubt, the book also will give auto drivers pause when reading what Rolene shares regarding the many minimally trained and questionable truckers who barrel recklessly down our highways with heavy loads.

Despite the unusual subject matter, this trucking adventure rarely falters. It shines with wit, wisdom and genuine likeability, making it a fun read for anyone looking for something unique.